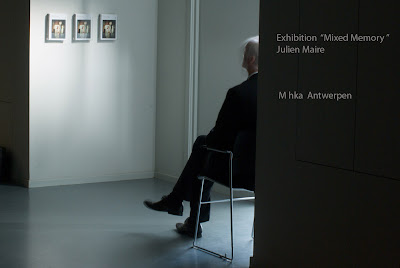 Here is the online documentation from my last Exhibition Mixed Memory

In 2003 the M HKA assumed guardianship of the private collection of Robert Vrielynck, a solicitor from Bruges. This collection can be classified under the archaeology of the new media and illustrates part of the development of film and projection apparatus by means of historical objects such as the magic lantern and the camera obscura. 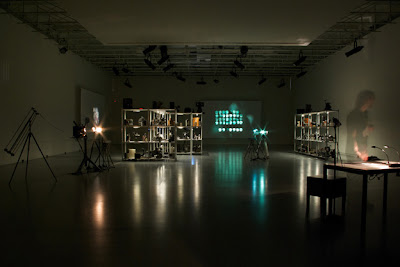 clic to enlarge ( all ) the pictures 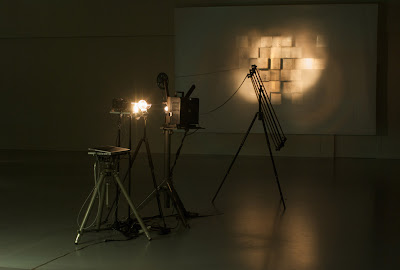 48 mirrors drived by servo motors and a software reflect part of a found footage
from the Vrielynck collection.

Produced by DOCK Berlin e.V. supported by the Hauptstadtkulturfonds. 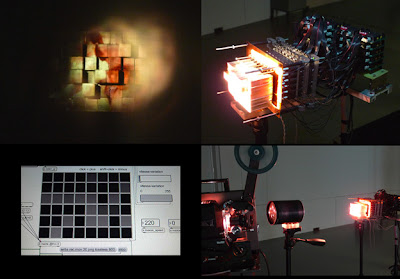 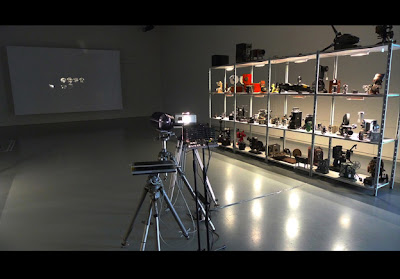 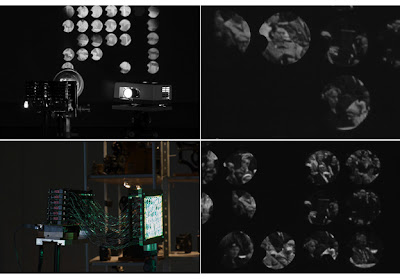 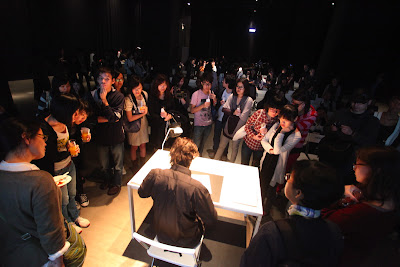 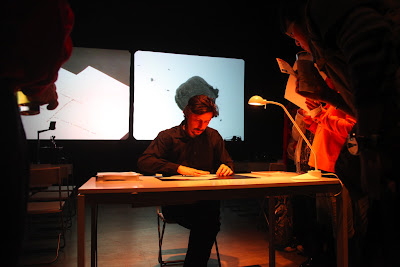 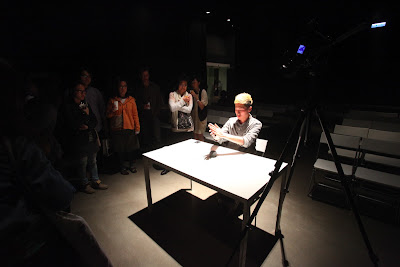 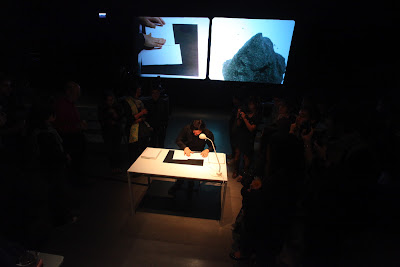 In Model for the Apocalypse (2008) a man shapes amorphous little heaps with ‘slow motion material’ made from micro steel balls with a special glue. This time there isn’t any manipulation of the viewer, the mass actually appears to desintegrate in slow motion. A camera records the ‘action’ in detail and this live transmission is projected on a screen besides the performer, thus conflating real time perception with mediated vision. Resembling a bizarre form of minimalist table top animation with caviar-like matter, the performance is preferably stretched for many hours, adding another layer to the already conflated perception of time by the slow movement of ‘sculpture’ and the mediated slow motion on the screen.

Maire thus questions to what extent our vision is conditionned by tropes from diverse media. How does our eye distinguish the features of three dimensional silvery grains on the table from the recording of the grains, translated into a frame filled with fuzzy pixels? What connatations does this automatic reading trigger? Whether in the form of installations, performances or two dimensional objects, the work of Maire is making obvious the slippage from analogue to digital media. From his earliest pieces onwards, the artist is addressing the process of mediation, rather than the epistemological, the content of the media.

Edwin Carels extract of " The productivity of the prototype " 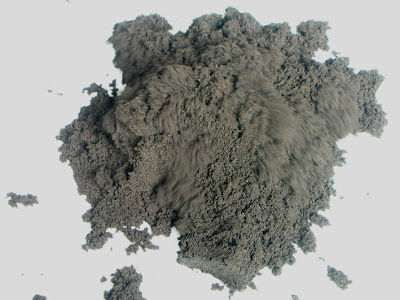 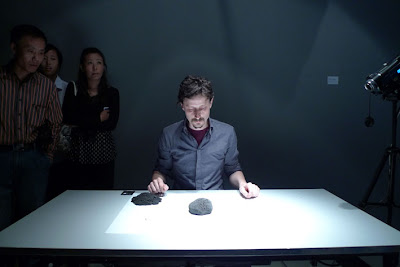 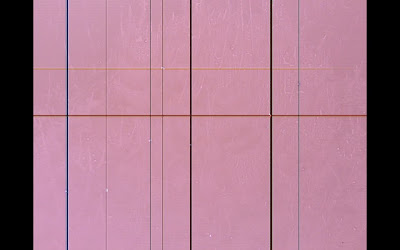 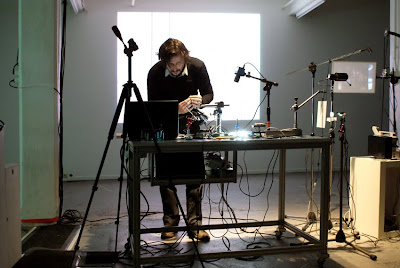 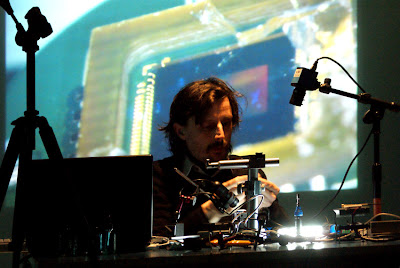 Open Core, 2009
With the "Exploding Camera", Julien Maire literally dissected and amputated a camera to present it like a contemporary version of the anatomy lesson. This he continues with the recent Open Core performances, whereby Maire revisits the public anatomical dissectionsfrom the 16th century. In the performance he opens up some machines of vision such as cameras and webcams, while also keeping a old Super 8 projector in operation.
The anatomical theatre was indeed one of the original sites for the construction of modern spectatorship in its early stages. Matching the highly theatrical spirit of Renaissance science, painters such as Rembrandt and medical instructors like Fabricius of Aquapendente shared audiences devoted to the workings of the human body. // Bleeker) // edited by Maaike Bleeker Anatomy Live – Performance and the Operating Theatre (2008)
Yet Maire never suffizes with a dismanteling or paralyzing analysis, he always implies a new synthesis, a re-animation, creating new forms of ‘living’ images without any negative, Frankensteinian bias. His approach is always constructive. “Media are spaces of action for constructed attempts to connect what is seperated,” Zielinski professes in his Deep Time of the Media. ( extract of the text of Edwin Carels " The productivity of the prototype - on Julien Maire’s Cinema of Contraptions ) 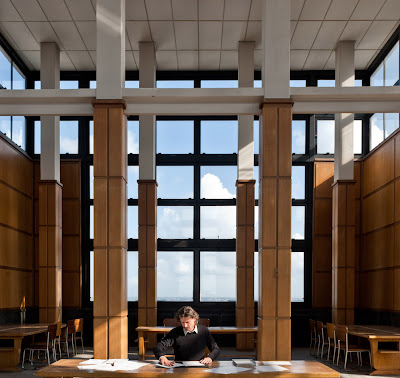 "Digit", Performance in the Booktower Ghent (BE) in the architecture of Henry van de Velde . 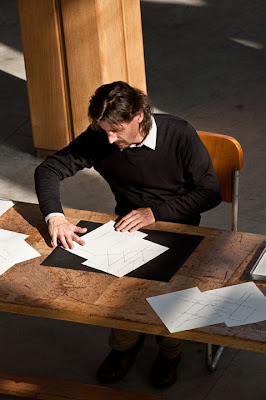 "Digit" is a live performance that is also conceived to be presented as a piece of living Art. A writer sits at a table writing a text. Simply by sliding his finger over a blank piece of paper, printed text appears under his finger. The spectators can come very close to the 'writer' and read the text following the movement of the finger. The writer remains absorbed in his task.
The performance is simple but quite disturbing. Nothing appears to come between the thought and the printed words. It seems that there is a shortcut somewhere: there is no visible hardware, no computer, no display, no noise, no projection. The spectator is free to follow a text written and drawn in a natural movement.
"Digit" is located between a cinematographic process and the process of writing. The “magic” of the apparition of a moving image is transcribed into a different cinematic setup. "Digit" enlarges the concept of projection and the concept of a project that operates in interstices between literature and moving image as well as referring to the surrealistic tradition of cutting and rearranging text : "Digit" is a kind of “Soft machine” *.
In opposition to other types of writing where machine interferes, the human movement is free and can print in any direction. The performance interfaces the human process between the thought and printed word. 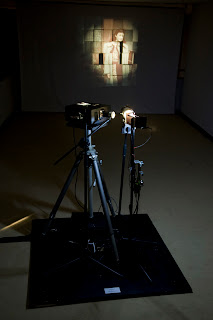 The "Inverted Cone" 2010, is my latest installation presented for the first time during the Transmediale 2010 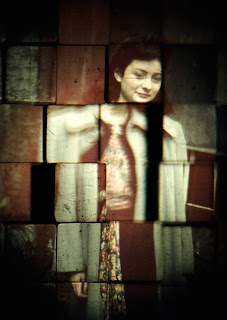 The "inverted cone" is a "memory station": a slide projection is reduced on a digital mirror as well as in the previous installation " the memory cone" 2009 ( Pdf ) 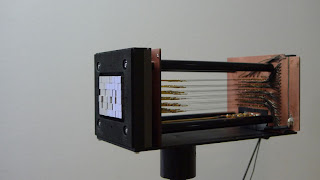 Here the mirror is a very low resolution "digital mirror" made with a stack of pieces of aluminium . Each of the 48 pieces or "pixels" are put in motion by shape memory alloy wires. A software changes the shape of the mirror and deconstructs or reconstructs the projected image . 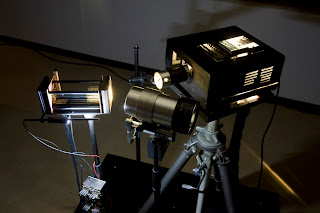 
“There is no story behind this Picture”

The effect and meaning of technical images are on their surface. We can seize them with a single glance and remain satisfied with what we have got: a superficial meaning. To probe into a deeper sense of an image we have to reconstruct its encoded dimensions.

For this purpose we should allow our gaze to move across the image surface. “Scanning” one element after another or “touching” them with our eyes, we establish time relations between them. We can return to a previously viewed element and then “after” becomes “before”. The longer we look at the picture the more we encage its time in the endless return of the same. After a while we stop perceiving the motionless surface altogether. Our vision erases it from its field, awaiting a new event that would break its inertia.

Is then a movement, alterability of a surface, a strategy to preserve an image? The attempt to transform the “time of an image” into the “time of a thought” unfolding the linearity of its sense?

In Julien Maire’s installation, the “time of an image” is not defined by the unconstrained movement of our gaze. This movement is programmed and driven by alterations of the image surface.

Here, the image does not constitute a solid and motionless area. Its reading is not restricted to a “frozen scene” or an “embalmed” moment evoking the sentimental Past. The initial, personal value of the photographic portrait, expressed in the locality of its time and space, recedes into the background. The picture exposes itself not as a “window onto the world” but precisely as an image: a post-historic and programmed surface.

Its secret lies in an apparatus - an intermediary between the reality and its representation. The black interior of the camera conceals in itself the event of “passage”: conversion and coding of information. Nevertheless the device that “made” the portrait is no more available, similarly to the reality it encoded. Julien Maire constructs his own instrument in order to get through to the dimensions hidden in the picture. The function of this new, complex apparatus is not to produce an image but to process given information. Analogously the artist can be called “Homo Ludens” rather than “Homo Faber”. Julien Maire plays with the apparatus and its magic. With child-like curiosity he sneaks into the “black box”, lights up its interior, de-composes its components to investigate processes responsible for our visual perception and memory. He indicates that the magic of the apparatus does not consist in affecting the external world, but in the way we imagine and think about it. Entering the zone of “Inverted Cone” we become one with the apparatus blurring the border between natural/human and artificial/technological. We start to see through the apparatus or maybe the other way round it is the apparatus that “sees” through our eyes.

The apparatus, this creation of human intelligence, is no longer an extension of a natural sense organ but its programmed simulation.

Julien Maire’s apparatus does not produce a picture but gives it back to us as its own effigy – a programmed game of modules. The image, divided into even fields, loses its integrity. It serves as a partite screen, a luminous board on which the apparatus plays its game with the viewer. Moving sectors allure us with allusions to some reality we cannot access directly. However, instead of the “other side of a looking glass”, they offer us only their flatness, disguised in a three-dimensional illusion. Mesmerized by the animated projection, we become more and more aware of this omnipotent process that transforms everything that exists into a “status quo”: the ubiquity of surfaces which has possessed us already.

Submitted to the focused atmosphere of Maire’s installation we observe how the world of tangible things, filled up with our emotions, thoughts and desires, is translated into a ephemeral entity: a game, a programmed piece of information. We leave the exhibition room with the photographic memory of the watched scene, now processed in the recesses of our minds, questioning our freedom in the face of apparatus, which form our perception/vision of the world and prompt us its meanings.

Past and coming exhibitions March-September 2010